As Chief Executive Officer, Veronica Cervera Goeseke oversees Cervera Real Estate’s eight offices and 300 associates across South Florida. Cervera Real Estate is one of the oldest and most successful privately held real estate companies in South Florida. As the first real estate brokerage to exclusively represent developers in the sales and marketing of their projects, Cervera created a specialized field within the industry; and was the first to market extensively in international markets.

Veronica is currently leading the sales efforts for Vita at Grove Isle, the most luxurious project to date by renowned Miami luxury developer Ugo Colombo.

Veronica, her sister Alicia and their mother and mentor, Alicia Sr., hold the record for the most condominium towers exclusively represented and sold in South Florida, currently over 115. The extensive portfolio includes the Apogee, Murano, and Murano Grande in South Beach, Grand Bay Towers on Key Biscayne, The Ritz Carlton Residences in Coconut Grove, Epic Residences in Downtown Miami and Grovenor House in Coconut Grove. Veronica also completed Cervera's $1.1 billion sellout of the St. Regis Bal Harbour Residences, where she sold two residences priced in excess of $20 million each. She brokered a record-breaking $23 million sale for a vacant lot in Indian Creek, brought the iconic Zuma restaurant to Downtown Miami, and inked the land sale of the Four Seasons in Brickell.

Named CEO in 2011, Veronica started her career at Cervera "in the mailroom" and worked her way through the organization to her present position. Her experience in various roles and circumstances at Cervera, in strong and soft markets, has proved invaluable in providing the right advice at the right time to Cervera clients.

Early in her career, Veronica contributed to Cervera's success by selling out significant projects like The Bristol and acquiring the development site too, The Palace, Villa Regina, The Imperial, Tiffany, Atlantis, and the Portofino. Veronica's relationships, knowledge, and experience make her and Cervera an unequaled resource in the South Florida luxury residential condominium market.

Veronica has been an active supporter of many civic organizations, especially those organizations related to children and family traditions. She served on the board of directors of the Florida International University Foundation and the boards of the Children's Home Society and Carrolton School for the Sacred Heart.

Veronica is married to Nickel Goeseke, a native of Germany. They have three children, Alexandra, Caroline, and Nick; Alexandra and Nick are currently working at Cervera. Caroline is pursuing an independent marketing career. Veronica and the Cervera family contributed to the evolution of South Florida into a global, cosmopolitan metropolis and are committed to Miami reaching even greater heights in the years to come. The entire 26th floor of the north tower at the St. Regis in Bal Harbour is on the market for ... 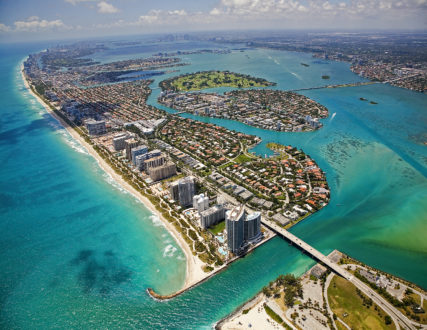 Veronica Cervera Goeseke, CEO of Cervera Real Estate, represented the buyer, along with her ...