Up in the downtown sky, look: Are those new high-rises meant to be hotels or condo buildings? More and more, you'll see towers that combine both things.

These dual-purpose mega towers are on the rise across South Florida, serving the region's tourism industry and the demand for new housing, experts say. Among them are a 92-story tower in┬áMiami┬áthat will showcase 902 apartments and 200 hotel rooms. In Fort Lauderdale, a 46-story building will offer 113 condos on the upper 30 floors of the building, in addition to hotel rooms.

A rash of condo-hotel developments had emerged during the building boom of the 2000s, but many failed amid the housing crisis as prices plunged, said┬áDeerfield Beach-based real estate analyst┬áJack McCabe. While projects mostly stopped in 2009, they started again just a few years ago, he said.

Here's a look at some of these high-rises underway.

The benefits to the residents include getting hotel-quality amenities and services that includes concierge and valet, as well as round-the-clock food delivery. Others offer massage at 2 a.m. and rides to the airport, he said. "There are some definite pluses to doing it this way," McCabe said. 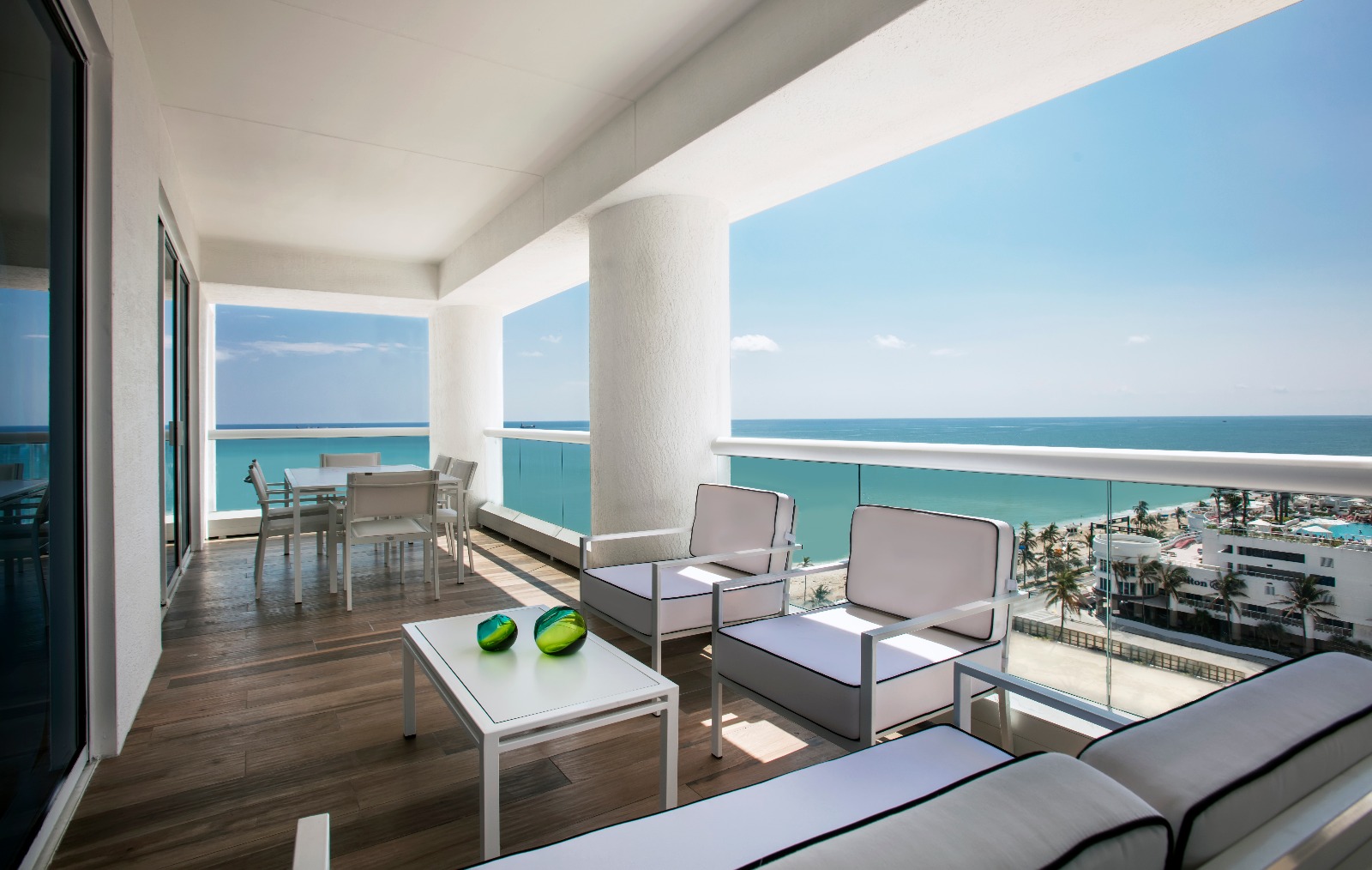 The 46-story tower┬áwill be home to a Hyatt Centric, the first hotel to be built on Las Olas Boulevard in 82 years. The project is expected to be complete in 2020 and will include 113 condos on the upper 30 floors of the building, and 238 hotel rooms.

For the people who will choose to live there, it could mean retreating to a quiet home, or socializing with new people, said Peggy Olin Fucci, CEO of OneWorld Properties, which is responsible for the sales and marketing of the project known as 100 Las Olas. "We say downtown is downstairs ÔÇö the extension of your home is downstairs," she said. "That type of lifestyle, where there is variety, is what differentiates owning a piece of downtown."┬á Peter Zalewski, principal of the Condo Vultures real estate firm in Miami, said condos tend to be built on top of the hotel rooms, because the renters are short-term and the condo owners will pay more for the view.

There are other reasons for separating the sides. Typically, there's a stigma to sharing space with "somebody on vacation, walking around in flip-flops and partying till 4 in the morning," he said. "Typically developers don't like to mix them."

So why buy? There's the prestige of being affiliated with a classy hotel ÔÇö an idea Zalewski says was spurred by┬áPresident Donald Trump's Trump International Hotel & Tower New York. "It comes down to vanity," he said. "It's marketing, and it's psychological."

Also in Fort Lauderdale,┬áconstruction began earlier this year┬áfor the Four Seasons Hotel and Private Residences Fort Lauderdale. The 22-story development will include 90 private residences and 130 guest rooms. Residences will range from 780 to more than 6,000 square feet. There will be four penthouses and three "sky homes" with 20-foot ceilings.

In June, the 12-story CIRC Hotel was the first hotel to open in downtown Hollywood in decades. The 27-story CIRC Residences, which make up 386 rental apartments, are connected to the hotel. Hotel guests can't access the apartments, but apartment residents can access the hotel amenities, including a round-the-clock concierge, valet parking, rooftop bar and restaurant.

Tyrone Foster, 28, moved into the CIRC Residences in November because of how convenient it is to live downtown.

"I like it," he said. "Boom, there's a Publix right here, there's a park over there for my daughter, there's nightlife right there. If I want to go get a drink, I can walk home. I love that the most ÔÇö my car stays in the garage."

He said it was "genius" to have a hotel combined with homes because of the perks usually associated with tourists, including valet. "There's a restaurant in the building. That's amazing. I don't have to leave the building, I really don't. As soon as I saw it, I said I like the feel of it. The staff greets you, they know your name."

The building is technically four stories, but will rise the height of a traditional five-story building, or 54 feet. The hotel and condo sections will have separate entrances, but will share some amenities such as the pool and the gym, said developer Alan Mindel.

Residents can get the "benefit of the hotel but still have the privacy of a typical condo," he said. It is expected to open the first quarter of 2019.

One Bayfront Plaza was built about 60 years ago as a 19-story office and retail building. Its owner of 40 years, Florida East Coast Realty, said it will wait for leases to expire in late 2020. By 2021, Tibor Hollo, the founder of FECR, plans to break ground on the 92-story high-rise of the project that will keep the same name.

The project will include 902 apartments, 200 hotel rooms, as well as office and retail space, at 100 S. Biscayne Blvd., although the hotel brand has not been finalized.

"The location is so powerful," Hollo said. "It's really good for any kind of development but we thought the combination gives a good balance to the building."

Also in Miami, developer Habitat Group recently started demolition of two apartment buildings near the downtown to make way for three interconnected towers of homes and hotel rooms. Known as the┬áSmart Brickell project, it is designed to have 150 hotel rooms and 170 condos, said Santiago Vanegas, founder, CEO and president of Habitat Group.

More amenities are usually offered at a hotel than in a standard condo, so combining the two gives residents the best of both worlds, Vanegas said.

"You could call the front desk to the hotel for room service from the coffee shop or the bar," Vanegas said of the condo residents.

Vanegas said some buyers might be hesitant to buy in a condo or apartment building with a hotel component because they feel they can lose privacy to tourists who share the amenities. He said that concern is usually abated with private elevators, and security systems to ensure that the condos remain sealed off to hotel guests.

"They love it," he said of the condo residents. "That's the market. It's an alternative."

Some projects divide the hotel and condos into separate buildings, but share the amenities.

That includes The Residences at┬áMandarin Oriental, Boca Raton, which is being constructed with 92 condos in a 12-story building. Residents will enjoy a 24-hour concierge, valet, maintenance, housekeeping and security that comes with the 12-story, 164 hotel rooms and suites next door.

Completion is expected in 2020.

Some South Florida projects offer another option known as "condo-hotels," where condo owners can rent their home when it's not in use and have it professionally managed.┬á

The W Miami, formerly known as Viceroy Miami, offers this arrangement on Brickell Avenue in Miami. The amenities for the people who live there? Twice-a-day housekeeping, laundry service, on-site tailors, bike rentals at no extra charge and car service to the airport, said Jesse Ottley, the president of the development sales division for Cervera Real Estate in Miami, who is handling the sales for the building.┬á Ottley called the combination projects a "new era of shared revenue" where residents can get room service even at 10 p.m.

This article was authored by Lisa Huriash. It originally appeared in the South Florida Sun-Sentinel. To read the story in its entirety, click here.┬á┬á